The Suitcase in the Mirror: cracking The Jabberwock

Posted on November 1, 2013 by thefriendlymoth

One of my favorite poems to teach is Lewis Carroll’s “The Jabberwock.” It is fun to memorize, and thrilling to recite. ‘Twas brillig and the slithy toves/did gyre and gimble on the wabe. It’s pure, exhilarating nonsense. To steal the kids’ slang, it’s epic. It’s also one big suitcase of cool lessons. 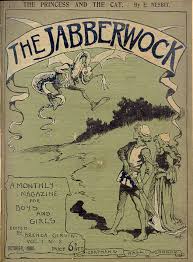 I’ve been teaching “The Jabberwock” since 2005, when I was a visiting poetry teacher in a third grade class in Missoula. The class I worked with there was very difficult, and I was a new teacher. Sometimes getting the kids to write poems felt like herding the proverbial cats, and then asking the cats to write about it. The day I did “The Jabberwock” was different. I showed them how it looked written in mirror writing, which is how it appears in Through the Looking Glass. I told them they could write in mirror writing as well. One student, a boy who often only wrote a labored word or two, was a mirror writing whiz. His poem was several lines long, and he only stopped because the class was over. Most children don’t have such a dramatic response to writing backwards, but it is still a challenge that feels like a game.

The next thing I pull out of the poem is the idea of portmanteau words. These words, like the suitcases they are named after, are a combination of two separate pieces. Or as Humpty Dumpty explains to Alice, “there are two meanings packed up into one word.” “Slithy”, for instance, is a portmanteau of “lithe” and “slimy.” I encourage the children to invent their own words, portmanteau and otherwise for their poems.

Then we talk through all the crazy vocabulary in “The Jabberwock,” invented and otherwise. This helps the story of the poem become clear (because of course all the nonsense actually serves a point). It usually culminates in us doing our best to outgrabe, just like the poor little lost green pigs called the mome raths. Outgribing, if you don’t know, is “something between bellowing and whistling, with a kind of a sneeze in the middle.” A room full of kids outgribing their hearts out is an amazing thing to witness.

By this point, it’s been plenty of talking so we get down to writing. I tell the class they can write a poem that tells an epic story, that may use made-up words, and if they want to they can write it in mirror-writing.  Sometimes, I will read pieces of the poems they write to the class and see what people picture when they hear the made-up words. Interestingly, they usually get the idea the poet was trying to express. For instance, when Jade wrote about going down the “grotiling mortiling way,” everyone pictured a twisty, mossy, stony, overgrown path.

If I have some quick finishers, I like to direct them towards looking up Lewis Carroll’s crazy words in the dictionary. They discover — like I did the first year — that his poem gave English two new words: galumph and chortle.  This raises the question of what words might join English in the future. And this thought: what if one of us invents a word that sticks around? If that happened, it would be a frabjous day indeed.