If you’re in the Delridge area before June 14th, drop into Youngstown Cultural Arts Center and check out Frog Hollow’s poetry exhibit! It’s in the hallway gallery, on the lockers near the end of the hall.

Our poems are about creatures — living, extinct, and legendary — and other aspects of the wild world. Some are acrostics. All have soundplay and art. The class wrote these poems with me in response to reading Lost Words by Robert MacFarlane and Jackie Morris. If you want an excellent entrance into poetry and nature literacy through pure wonder and beauty, check out this book. It’s inspired our curriculum all winter and spring.

Anyhow, here are some quick photos of the exhibit. I’m so thrilled to be back in the classroom with these fine young writers next year. Come join us make more magic. 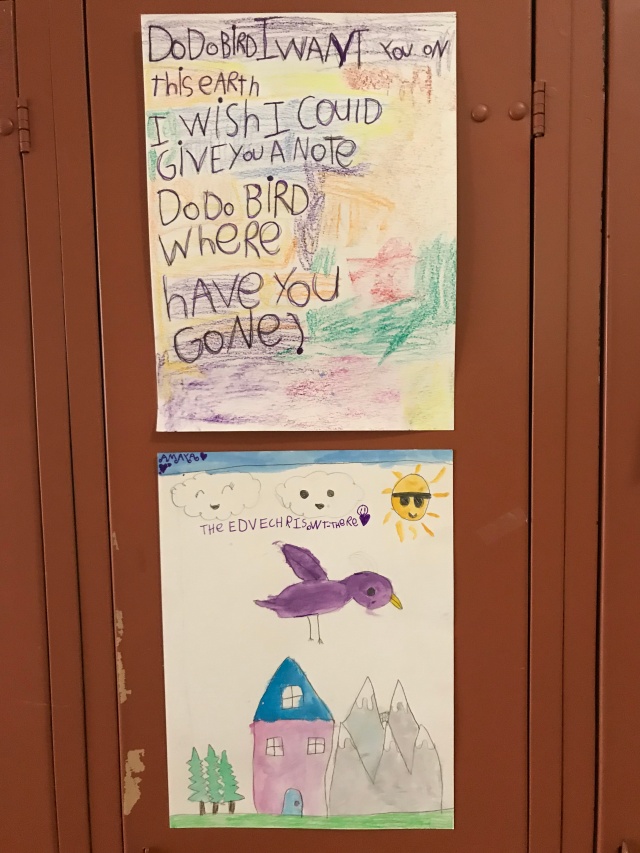 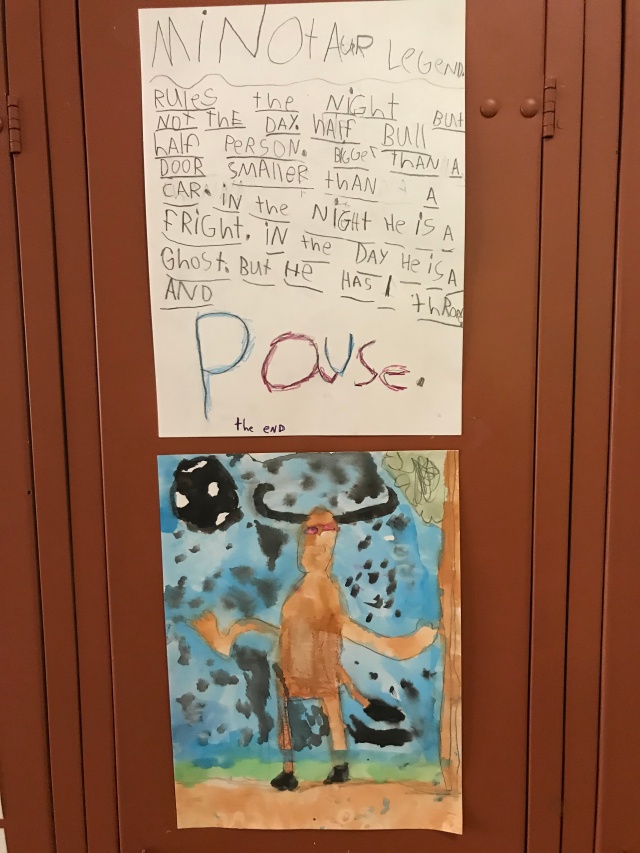 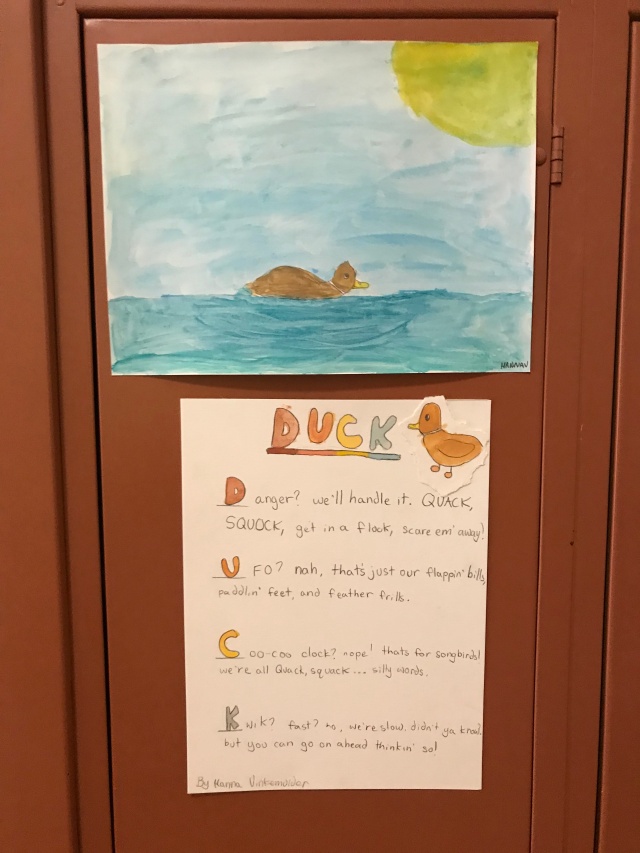 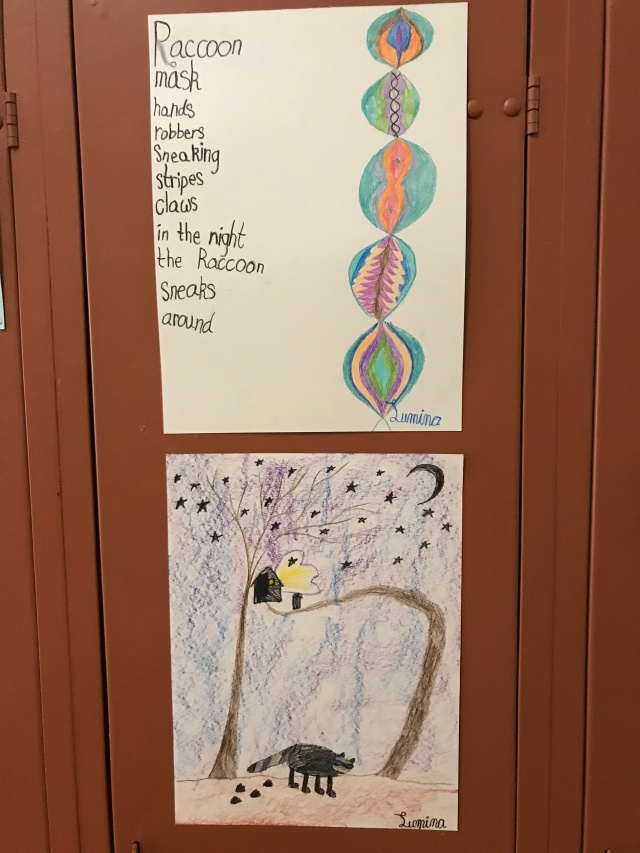 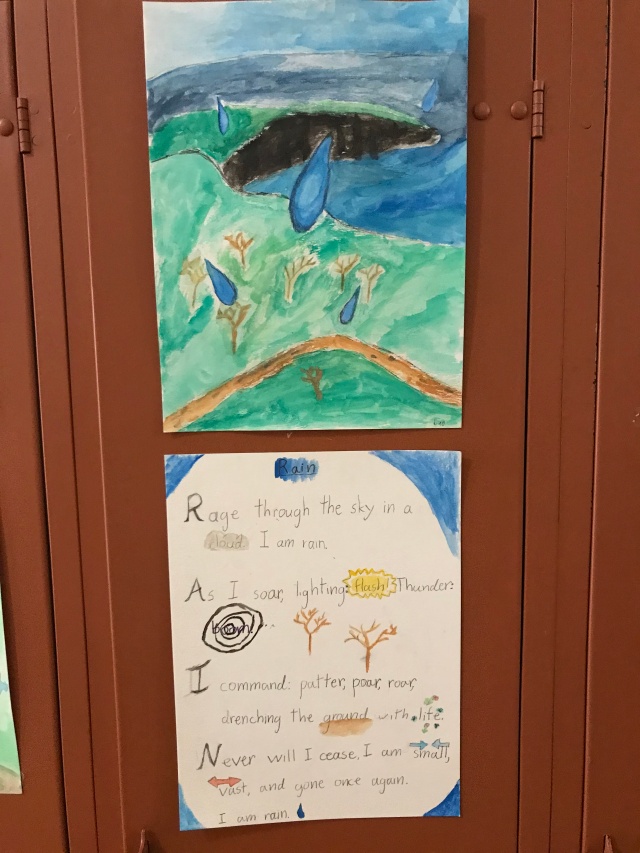 I enjoy many, many things my students write, but every once in a while, one of them writes a poem that really strikes me. I’ll walk around thinking about it. I’ll want to tell it to everyone I know. This happens to me with all my favorite poems. I guess it’s just that some of my favorite poets are seven years old.

I recently shared Kaveh Akbar’s “Orchids are Sprouting from the Floorboards,” with my students, because he is a new favorite poet of mine. The kids loved it, and said amazing and thoughtful/hilarious things about it. (“Maybe Lydia is the earth, the normal earth that is not covered in orchids.” “It reminds me of woodpeckers, and my grandmother.” “Oh, I thought it was ORCAS are sprouting from the floorboards.” “I love people with weird hair.” ) And then we wrote our own poems where a word comes back again and again, and then doesn’t.

Lots and lots of great writing came out of that day, including a poem by Amaya that I’ve been carrying with me ever since: Dodo bird I want you on this earth/I wish I could give you a note/Dodo bird where have you gone?

It’s hard to say why we love the poems we do, but we do.

Poetry in a Vacuum

The Seattle Frog Hollow class wrote this poem as a group this spring. Each student wrote one or two lines and I put them in this order. The prompt was a comparison that had to do with outer space. They took that and wrote things like “Stars are bright as bananas” and “Stars are tiny holes in the suffocating tarp of matter and space.” It makes me really happy.

Poetry in a Vacuum

We thought Pluto was a planet.

Outer space is a vast ocean of nothing.

It is as depressing and lonely as a dark gray fog setting on a wrecked wasteland.

Waves that wash on the ocean beach, waves that shimmer in the sun.

The planets are like fish in a fish tank.

Planets are like tiny rowboats pulled in an orbital tide.

Black holes like pools of black ink in the sea.

Outer space is an unknown as the ocean.

It’s bigger than that.

The moon is a rock. No food on the moon!

Outer space is a timeless refrigerator at a desolate country grocery store.

The stars are as bright as bananas. Asteroids heavier than the heaviest rocks. Planets floating around like balloons.

The silence of space is like the scream of the lightrail hurtling through the tunnel.

The earth is like a working machine among many dead ones.

Not ever knowing where wormholes will take you, you always have a sense of where they will go.

There is no control in space. It is like being a fly in a spring storm.

Planets in outer space are dim glimmers of hope in human eyes.

The stars are like balls shining yellow and white.

The stars are like sour lemons. The moon looks green in the night sky.

The stars are bright patterns holding unexplored secrets and telling stories of our universe.

The stars are like shells on the beach forming patterns in the sky.

Stars are tiny holes in the suffocating tarp of matter and space.

The stars are the sky.

As impossibly lit as a glowing lightbulb that has just gone out.

Posted on July 2, 2018 by thefriendlymoth

The Seattle Frog Hollow class has the honor of having a poetry poster exhibit in the hallway gallery at Youngstown Cultural Arts Center, alongside the work of other artists in the community. It is up right now, and if anyone is in the neighborhood feel free to check it out. I’m really proud of the work they put into their posters, as well as the creative brightness of their writing itself. Here’s a small sampling, but my photos don’t do the exhibit justice. There are poems about the colors of sounds, funny poems, poems about nature and Pokemon and Bitcoin and cats — and so much more.